LEC SuperFantasy is a fantasy card game based on the LEC competition where you manage a team with real players in a virtual league. The goal is to create the best possible roster for each of the gamedays of the league in order to get the best score possible.
All users start with all the basic level player cards, having the freedom to line up the players they believe will perform better in each position during the real gameday.

HOW MANY TYPES OF CARDS ARE THERE?

There are 3 types of cards: player, item and event.
WHAT IS A PLAYER CARD?
There are 82 player cards, each card is a player or coach of the current LEC Competition. Each user must choose a player for each of the positions that exist to create a Roster and participate in a gameday.
There are four different player card levels. Users have all level 0 players to start playing and create the Roster that they like the most. Level 1 player cards have one slot to equip an Item and improve their score at the end of the gameday. The Level 2 card has 2 Slots and the Level 3 card has 3 slots.

WHAT IS A PLAYER CARD?
There are 82 player cards, each card is a player or coach of the current LEC Competition. Each user must choose a player for each of the positions that exist to create a Roster and participate in a gameday.
There are four different player card levels. Users have all level 0 players to start playing and create the Roster that they like the most. Level 1 player cards have one slot to equip an Item and improve their score at the end of the gameday. The Level 2 card has 2 Slots and the Level 3 card has 3 slots.
WHAT IS AN ITEM CARD?

There are 75 item cards available to increase a player’s final score. There are 4 levels of rarity: common, rare, epic and legendary. Each card has a usage recommendation each of the positions.

WHAT IS AN EVENT CARD?

There are 12 Event cards, the event cards grant a bonus to the final result of a specific player or to the entire roster. Events have no rarity and are consumable, which means they disappear after being used in a gameday.

Sparks are used to create new cards and the way to obtain Sparks is by destroying item or player cards.

HOW DO I GET CARD PACKS? WHAT IS THE CONTENT OF EACH CARD PACK?
Packs can only be purchased with gold coins (95 gold coins). There are 5 cards in every pack: 2 players (level 1 to 3) and 3 random cards, which can be an Event, a random amount of Gold or an item Card (Common, Rare, Epic or Legendary).
The odds of getting any of these cards are as follows: 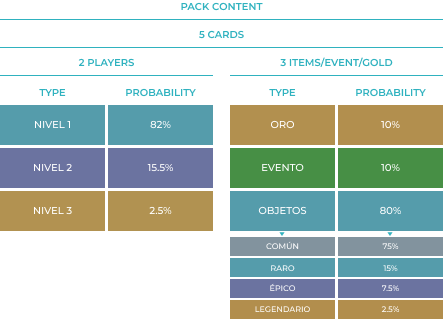 In a pack there will always be 2 player cards with a probability of appearance that depends on the level of rarity. Being the player card Lvl 1 the most common card to obtain, with an 80% probability, Lvl 2 with 15% and Lvl 3 with 5%.
The other 3 random cards can be an Event card (10% probability), an amount of Gold coins (10% probability) and an Item card (80% probability). The amount of gold coins can be any amount from 5 to 10, with a 20% chance for each quantity.
In reference to object cards, there is no specific probability of occurrence due to card rarity. The appearance of an Object card is determined by the weight of that card, the better the card, the less likely it is to appear in a card pack.
HOW DOES INCREMENTAL LUCK WORK? 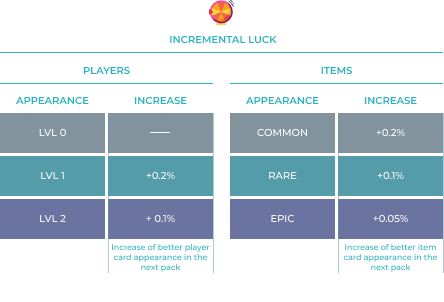 HOW DO I PARTICIPATE IN A GAME DAY?

To participate in a game day players have to create a complete roster and meet all the necessary requirements:

WHAT IS THE LINE UP COST?

The lineup cost is the cost limit allowed per day to be able to add players to the roster. The cost limit increases by +2 every day starting at 12 and being 22 on the last day (final).

WHAT IS THE COMPETITION SPLIT?

A split is composed of 18 gamedays of the regular league and 3 days of playoff (quarterfinals, semifinals, final). Two full splits of the League of Legends LEC are played each year.

HOW DOES PLAYOFFS SYSTEM WORKS?

Playoffs are split up in three stages (quarterfinals, semifinals + loser bracket and finals), with games being played in a best of 5 maps format.

Each one of these three stages will count as one SuperFantasy gameday. This means you will be able to prepare a roster for quarterfinals, another one for semifinals / loser bracket and a third one for the grand final. Besides that, the roster cost limit will increase normally as it does with normal gamedays (two points more per gameday).

In the quarterfinals, the rule that limits the number of player cards per team will remain as it was during the regular season (maximum of two players and coach from the same team). However, we are increasing this limit to three players from the same team when arriving at semifinals + loser bracket and finals.

Finals: three players from one team, two from the other

This is why your choices during finals will be very different: you will need to pick three players from one team and two from the opposing team. This way we’ll be rewarding your strategy when it comes to betting on roles that will come out on top against their direct opponents (top, jungle, etc.), and the optimization of your equipped items, despite the fact that at least two of your drafted players will be defeated.

On the other hand, given that each playoffs game will be a best of 5, the final scores from both players and items will be the average of played games. Thanks to this, encounters that end in a 3-0 will not suffer any disadvantage against 3-1 or 3-2 resultsFor example, if the item «Heavenly Vision» (which awards 20 points if a player gets the highest vision score of the game) has its requirements met only in the first map of a series that ends in a 3-1, those 20 points will be divided between the four maps of the series. Therefore it would award a total of 5 points.

Keep in mind that if a player is switched out during a series, his score will still be divided between the games his team played in said best of 5

HOW MANY POINTS DO I GET IN A DAY? HOW CAN I KNOW MY POSITION IN RANKING?

After every day, the points will be distributed to every player who has lined up and played in the day. The score is calculated according to a series of criteria, including kills, deaths, assists, equipped items and events.

Also, every user is rewarded according to their position in the main lobby ranking. All users receive a specific amount of packs.
The user can see the detailed score of their alignment in the results tab within the league view.
WHAT HAPPENS IN CASE OF TIE OR DRAW?

In the case that two users get the same score in the same gameday, the user who saved the roster first will win.

WHY DOES THE COST OF A PLAYER CHANGE FROM ONE DAY TO ANOTHER?
The cost of the players can change according to the popularity of a player in the previous day, that is, the times that player has been lined up by other SuperFantasy users.
The number of users who have a valid roster and the percentage of users who have ligned up a specific player in the previous day are taken into account. Depending on the percentage of use of that player, his cost will vary the next day, but it can never be less than 0. 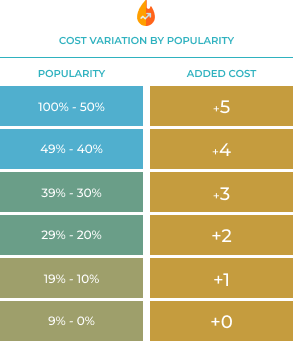 WHAT TYPES OF LOBBIES ARE THERE AND HOW CAN I JOIN OR CREATE ONE?

There are 3 types of lobbies.

General Lobby: All users participate from the beginning in the General Lobby competing for the prizes of each day.

Club Lobby: Each user can only join one Club Lobby. Each Club Lobby has different scoring criteria (modifiers) in the final score of the user’s roster. Eg G2 Lobby: G2 players score 100% extra base points in that Lobby.

Private Lobbies: Users can create their own lobbies to play with friends or other people. The cost of creation of those lobbies is 200 gold coins. They can either be public or private.

WHAT IS THE DAILY PICK?
Users can claim a card in the website every day, clicking the green present package on the header. Nine different cards are shown every day, and users get to pick one of them randomly, without knowing which one is it.
WHAT HAPPENS WITH MY COLLECTION AND GOLD AT THE END OF THE SPLIT?
Once the split ends, your collection and sparks will be reset. Therefore, the card collection does not transition between splits. However, gold coins will transition to the next Split.